Saffron known by its general name of saffron and scientific name of crocus sativus is the most precious herb earth. 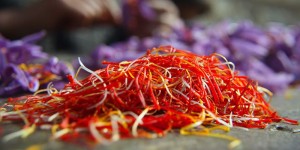 Arabs use it in preparing various dishes and a special kind of tea.  Saffron and cardamom are two essential elements of Arab coffee. Saffron is used in an Indian dish called “Biryani”. In the south of Sweden and northern Italy, saffron is used in preparing their well-known saffron rice “Risotto”. The French are quite familiar with saffron since they use it in various dishes. In Spain it is used to prepare a dish called “Paella” and in England and Germany it is used in making “Saffron Cake”.