Fortunately, the delicately flavored and versatile almond is available throughout the year to make a healthy and tasty addition to both sweet and savory dishes. Although packaged almonds are available year round, they are the freshest in mid-summer, which is when they are at the height of their season.

A high-fat food that’s good for your health? That’s not an oxymoron, its almonds. Almonds are high in monounsaturated fats, the same type of health-promoting fats as are found in olive oil, which have been associated with reduced risk of heart disease. Five large human epidemiological studies, including the Nurses’ Health Study, the Iowa Health Study, the Adventist Health Study and the Physicians Health Study, all found that nut consumption is linked to a lower risk for heart disease. 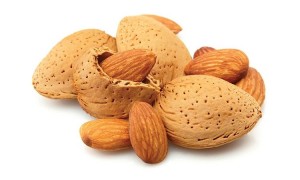 In addition to their cholesterol-lowering effects, almonds’ ability to reduce heart disease risk may also be partly due to the antioxidant action of the vitamin E found in the almonds, as well as to the LDL-lowering effect of almonds’ monounsaturated fats.

In addition to healthy fats and vitamin E, a quarter-cup of almonds contains 62 mg of magnesium plus 162 mg of potassium.

Magnesium is Nature’s own calcium channel blocker. When there is enough magnesium around, veins and arteries breathe a sigh of relief and relax, which lessens resistance and improves the flow of blood, oxygen and nutrients throughout the body.

Potassium, an important electrolyte involved in nerve transmission and the contraction of all muscles including the heart, is another mineral that is essential for maintaining normal blood pressure and heart function. Almonds promote your cardiovascular health by providing 162 mg of potassium and only 0.2 mg of sodium, making almonds an especially good choice to in protecting against high blood pressure and atherosclerosis.

Lessening after-meal surges in blood sugar helps protect against diabetes and cardiovascular disease, most likely by lessening the increase in cholesterol-damaging free radicals that accompanies large elevations in blood sugar. This is one reason why low- glycemic index diets result in lower risk of diabetes and heart disease.

Almonds appear to not only decrease after-meal rises in blood sugar, but also provide antioxidants to mop up the smaller amounts of free radicals that still result. (Jenkins DJ, Kendall CW, Journal of Nutrition)

Further research shows that eating almonds along with a high glycemic index food significantly lowers the glycemic index of the meal and lessens the rise in blood sugar after eating.

Eating almonds reduced the glycemic index (GI) of the meal and subjects’ rise in blood sugar in a dose-dependent manner—the more almonds consumed, the lower the meal’s GI and the less the rise in subjects’ blood sugar after eating. 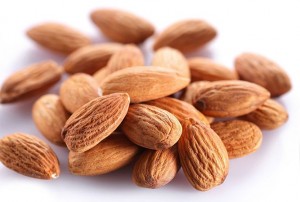 Practical Tips: Don’t just enjoy almonds as a between-meal snack. Spread a little almond butter on your toast or down the center of a stalk of celery. Add a handful of lightly roasted almonds to your salad or chop and use as a topping for pasta, steamed or healthy sauteed vegetables. When eating foods with a higher glycemic index, including almonds in the meal can help keep your blood sugar under control.

Even individuals who are experiencing problems with their blood fat levels may not automatically need to shy away from high-fat food snacks like almonds. Researchers at the University of Toronto, Canada have shown that a 2.5 ounce snack of almonds each day can do a better job in lowering blood LDL and raising blood HDL than a whole wheat muffin having the same amount of fat and fiber as almonds. They also found that markers of antioxidant status in the body could be improved with the incorporation of almond snacks. It was the many phytonutrients (especially flavonoids) found in almonds that were believed to account for some of these special almond benefits.

New research on almonds adds to the growing evidence that eating whole foods is the best way to promote optimal health.

The flavonoids found in almond skins team up with the vitamin E found in their meat to more than double the antioxidant punch either delivers when administered separately, shows a study published in the Journal of Nutrition.

Twenty potent antioxidant flavonoids were identified in almond skins in this study, some of which are well known as major contributors to the health benefits derived from other foods, such as the catechins found in green tea, and naringenin, which is found in grapefruit.

If you’ve been reluctant to add almonds to your diet because of their high calorie count, a study published in the British Journal of Nutrition may help convince you to give these delicious, nutrient-dense nuts a try.

In this study, the normal eating patterns of 43 men and 38 women were followed for 6 months. Then they were told to eat approximately 2 ounces or one-quarter cup of almonds daily but were given no other instructions about changing their diet, and followed for an additional 6 months. By the end of the study, a number of very beneficial changes were seen to naturally occur. 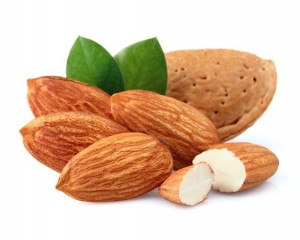 At the same time, their intake of Trans fatty acids, animal protein, sodium, cholesterol and sugars significantly decreased by 14, 9, 21, 17 and 13%, respectively. Both sets of changes in nutrient intake closely match the dietary recommendations known to prevent cardiovascular and other chronic diseases.

Twenty years of dietary data collected on over 80,000 women from the Nurses’ Health Study shows that women who eat least 1 ounce of nuts, peanuts or peanut butter each week have a 25% lower risk of developing gallstones. Since 1 ounce is only 28.6 nuts or about 2 tablespoons of nut butter, preventing gallbladder disease may be as easy as having a handful of almonds as an afternoon pick me up, tossing some almonds on your oatmeal or salad or packing one almond butter and jelly sandwich (be sure to use whole wheat bread for its fiber, vitamins and minerals) for lunch each week.

In addition to being eaten raw, almonds are a wonderful addition to a variety of recipes from salads to baked goods.

Whole shelled almonds can be chopped by hand or can be placed in a food processor. If using a food processor, it is best to pulse on and off a few times, instead of running the blade constantly, as this will help ensure that you end up with chopped almonds rather than almond butter. To roast almonds at home, do so gently—in a 160-170°F (about 75°C) oven for 15-20 minutes—to preserve the healthy oils.