Refreshingly succulent, tart and sweet mulberries are indeed rich in numerous health benefiting flavonoid phyto-nutrients. Botanically, they are the berries obtained from the silkworm tree belonging to the Moraceae family, within the genus: Morus. Scientific name: “Morus nigra. L.” In Spanish, they are known as moras.

More than hundred species of morus exist. In taxonomy, species generally are identified not by the color of their fruits (berries) but by the color of flower buds, and leaves. So, a morus plant can exhibit different color berries (black, purple, red, white, etc.) in the same plant.

Three species have been recognized for their economic importance. 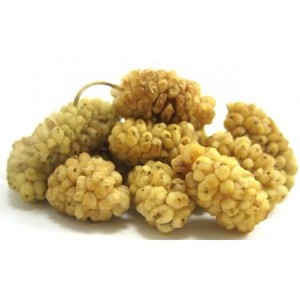 Delicious, fleshy, succulent mulberries are less in calories (just 43 calories per 100 g). They compose of health promoting phyto-nutrient compounds like polyphenol pigment antioxidants, minerals, and vitamins that are essential for optimum health.

The berries contain resveratrol, another polyphenol flavonoid antioxidant. Resveratrol protects against stroke risk by altering molecular mechanisms in the blood vessels; reducing their susceptibility to damage through reduced activity of angiotensin (a systemic hormone causing blood vessel constriction that would elevate blood pressure) but potentiating production of the vasodilator hormone, nitric oxide.

In addition, these berries are an excellent sources of vitamin-C (36.4 mg per 100, about 61% of RDI), which is also a powerful natural antioxidant. Consumption of foods rich in vitamin-C helps the body develop resistance against infectious agents, counter inflammation and scavenge harmful free radicals.

Further, the berries also contain small amounts of vitamin A, and vitamin E, in addition to the above-mentioned antioxidants. Consumption of mulberry provides another group of health promoting flavonoid polyphenolic antioxidants such as lutein, zea-xanthin, ß-carotene and a-carotene in small but notably significant amounts. Altogether, these compounds help act as protect from harmful effects of oxygen-derived free radicals and reactive oxygen species (ROS) that play a role in aging and various disease processes.

Zea-xanthin, an important dietary carotenoid selectively concentrates into the retinal macula lutea, where it thought to provide antioxidant functions and protects the retina from the harmful ultraviolet rays through light-filtering actions.

Mulberries are an excellent source of iron, which is a rare feature among berries, contain 1.85 mg/100 g of fruits (about 23% of RDI). Iron, being a component of hemoglobin inside the red blood cells, determines the oxygen-carrying capacity of the blood.

They also good source of minerals like potassium, manganese, and magnesium. Potassium is an important component of cell and body fluids that helps controlling heart rate and blood pressure. Manganese is used by the body as a co-factor for the antioxidant enzyme, superoxide dismutase. 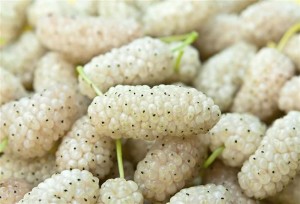 They are rich in B-complex group of vitamins and vitamin K. Contain very good amounts of vitamin B-6, niacin, riboflavin and folic acid. These vitamins are function as co-factors and help body in the metabolism of carbohydrates, protein, and fats.

After cleaning, gently pat them dry using soft cloth. Take care not to squeeze or press the berries, else they will deface, and stain cloth, hand, etc. Then, trim away its stem end by simply pinching off with fingers or either using a small scissors or paring knife.

The berries have found their unique place in the kitchen, be it a simple mulberry pie, or somewhat, more complicated mulberry wine. They are also favored in variety of recipes.

Here are some serving tips: